Western Xia, also known as Xi Xia or the Tangut Empire, was a Tangut empire in northwestern China that existed from 1038 to 1227, with Xingqing serving as its capital. The empire was founded by Li Yuanhao, who led an army of 500,000 Tangut warriors in a series of campaigns against the Uyghurs of Gansu and the Chinese Song dynasty. In 1038, Li Yuanhao declared himself "Emperor Jingzong of Western Xia", and the Tanguts recognized the legitimacy of the Song dynasty in 1044 in exchange for the Song giving annual gifts to the Tanguts. In 1125, Western Xia became a vassal state of Great Jin. During the early 1200s, Genghis Khan's Mongols launched raids into Western Xia. In 1209, Genghis Khan undertook a large campaign to subdue Western Xia, and Emperor Xiangzong of Western Xia was forced to surrender in 1210. The center of the Tanguts' power shifted to Kharakhoto on the border with Mongolia, and the city was utterly destroyed by the Mongol Empire in 1227, ending Western Xia; the dynasty was conquered by the Mongols. 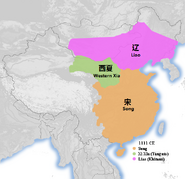 Map of China in 1111
Add a photo to this gallery
Retrieved from "https://historica.fandom.com/wiki/Western_Xia?oldid=111461"
Community content is available under CC-BY-SA unless otherwise noted.