When Hideyoshi Hashiba fell ill and died in 1598, the land became engulfed in civil strife once more, as Hideyoshi's former generals fought for power. Among them were Mitsunari Ishida, Masanori Fukushima, and Ieyasu Tokugawa. Mitsunari Ishida and Masanori quarreled over succession over Hideyoshi, and Masanori wanted him dead. Kanetsugu Naoe and Tokugawa assisted Mitsunari, defeating Masanori's army. But soon, conflict errupted between Mitsunari and Ieyasu, the last two contestants for power. Ieyasu drew supporters mainly from the east, Mitsunari from the west, which gave his forces the name, the "Western Army". The Western Army defeated the Tokugawa at Oshi Castle, Fushimi Castle, and Numata Castle, made a draw with them at Kuzegawa, and lost at Ishigaki Plains and Hasedo, before the final battle occured at Sekigahara. The Eastern Army defeated the Western Army by convincing the Mori and Kobayakawa to defect, ruining Mitsunari's cause, and Mitsunari was slain, ending the war in a Tokugawa victory. 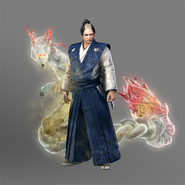 Hideaki Kobayakawa at the battle

The Shimazu at Sekigahara 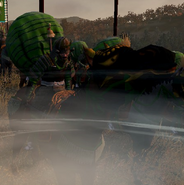 Yoshihiro Shimazu at Sekigahara
Add a photo to this gallery
Retrieved from "https://historica.fandom.com/wiki/Western_Army?oldid=10813"
Community content is available under CC-BY-SA unless otherwise noted.