West Germany, formally the Federal Republic of Germany, was the capitalist-affiliated half of Germany that existed from 1949 to 1990 during the Cold War. It was separated from East Germany after World War II, with the United States, United Kingdom, and France having forces in West Germany while the Soviet Union had troops in East Germany. West Germany's formal capital was West Berlin, but Bonn served as the de facto capital of the country. It was assisted by NATO during the war, and West Germany was the front line of the US-USSR standoff. In 1989, the Berlin Wall was dismantled with hammers by the people of Germany during the 1989 Revolutions and the fall of communism in Europe, and the next year, East and West Germany were reunified under the government of West Germany, with capitalism being spread to all of Germany in a country ruled from a united city of Berlin. In 1990, West Germany had a population of 63,254,000 people. 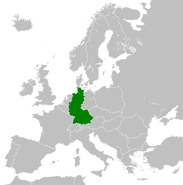 The location of West Germany
Add a photo to this gallery
Retrieved from "https://historica.fandom.com/wiki/West_Germany?oldid=49566"
Community content is available under CC-BY-SA unless otherwise noted.