Vladimir ''Vlad'' Vladimirovich Putin (born 7 October 1952) was Prime Minister of Russia from 9 August 1999 to 7 May 2000 (succeeding Sergei Stepashin and preceding Mikhail Kasyanov) and from 8 May 2008 to 7 May 2012 (succeeding Viktor Zubkov and preceding Dmitry Medvedev) and President from 31 December 1999 to 7 May 2008 (succeeding Boris Yeltsin and preceding Medvedev) and from 7 May 2012 to 10 August 2015 (succeeding Medvedev and preceding Vorshevsky) and from 12 January 2017 (succeeding Vorshevsky) Putin, a former KGB colonel, rose to power in the aftermath of Yeltsin's resignation, and he founded the big tent United Russia party as a vehicle for his authoritarian rule. He was infamous for his suppression of the press, his jailing or killing of opponents, and for his alleged meddling in the politics of other countries, notably sabotaging Democratic Party presidential nominee Hillary Clinton's campaign during the United States' 2016 presidential election.

Vladimir Putin was born in Leningrad, Russian SFSR, Soviet Union on 7 October 1952 to Atheist father and Orthodox mother. He graduated from Leningrad State University in 1975 with a law degree, and he served as a KGB foreign intelligence officer for 16 years and rose to the rank of Lieutenant Colonel. He resigned in 1991 to enter politics in Saint Petersburg, and he worked for the Mayor's office until he decided to move to Moscow in 1996. There, he helped to oversee the transition of property from the USSR and the CPSU to the Russian Federation, and he was appointed to Boris Yeltsin's presidential staff. In 1998, Putin was appointed head of the FSB intelligence security service, which was the successor to the KGB. He continued to rise in the ranks until he was appointed Prime Minister in 1999, and, when the unpopular Yeltsin resigned on 31 December 1999, Putin became acting president.

Between 2000 and 2004, Putin reached a "grand bargain" with his country's powerful oligarchs, allowing for them to maintain most of their powers in exchange for their political support. Putin also oversaw the initiation of the Second Chechen War, which he had allegedly instigated with an FSB false flag operation in 1999 in the "Russian apartment bombings". In 2004, Putin was re-elected to the presidency with 71% of the vote, and his handling of the Moscow theater hostage crisis led to his approval rating rising to 83%. In 2005, he launched projects to improve his country's healthcare, education, housing, and agriculture, but, at the same time, he persecuted political opponents such as Mikhail Khodorkovsky, who was accused of fraud and tax evasion in retribution for his support of Putin's liberal and communist opposition. The 2006 murder of journalist Anna Politkovskaya led to widespread protests a year later, and Putin dissolved the State Duma in response; his party, United Russia, was re-elected to power with 64.24% of the popular vote, continuing to enjoy popular support.

Putin was barred from a third term by the Constitution, so he maintained his political domination by switching power with his Prime Minister, Dmitry Medvedev, becoming Medvedev's Prime Minister after Medvedev became President. Putin overcame the consequences of the world economic crisis and oversaw the stabilization of Russia's population following a long period of demographic collapse, leading to continued popularity.

In 2011, Medvedev announced that United Russia would nominate Putin as its presidential candidate, and Putin once again switched power with Medvedev, who became his Prime Minister after Putin won the election with 63.6% of the vote in an election widely seen as rigged. Protests against Putin were met by even larger pro-Putin rallies, and Putin was able to continue leading the country as its semi-authoritarian leader. He banned the LGBT rainbow flag and published works containing homosexual content, founded the All-Russia People's Front as a potential future successor to the increasingly unpopular United Russia party, oversaw the military annexation of the Crimea from Ukraine in 2014, sent soldiers and supplies to assist the pro-Russian separatist states in eastern Ukraine in the Donbass War, authorized the use of Russian airstrikes and special forces to support Bashar al-Assad's Syrian regime during the Syrian Civil War in 2015, ordered an influence campaign to denigrate Democratic Party presidential candidate Hillary Clinton during the United States' 2016 presidential election, and oversaw the creation of a powerful Russian cyberwarfare force. Failing oil prices coupled with international sanctions imposed following the 2014 Crimean Crisis led to the Russian economy entering a recession until 2016, and Putin was re-elected as President in March 2018 with 76% of the vote. 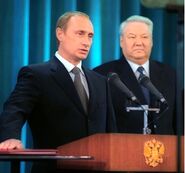 Putin with Donald Trump
Add a photo to this gallery
Retrieved from "https://historica.fandom.com/wiki/Vladimir_Putin?oldid=321024"
Community content is available under CC-BY-SA unless otherwise noted.