Uzbekistan is a Central Asian republic, with Tashkent serving as its capital. It was originally settled by the Scythians, but it was later conquered by Macedon, and it was under Persian rule from the end of Greek-Macedonian rule to the Muslim conquest in the 7th century. The majority of the population was converted to Islam during the reign of the Rashidun Caliphate and the Umayyad Caliphate, and, after the Mongol conquests, the lands became dominated by Turkic peoples. In the 14th century, Timur established the Timurid Empire with his capital at Samarkand, but the Uzbek Shaybanids conquered Uzbekistan in the 16th century, and the seat of power moved to Bukhara. The region was split into three states: the Khanate of Khiva, the Khanate of Kokand, and the Emirate of Bukhara, and the emirates were subjected to Russian rule during the 19th century. In 1924, under Soviet rule, the Uzbek SSR was established, and, on 31 August 1991, it became the independent "Republic of Uzbekistan" during the Dissolution of the USSR. In 2017, Uzbekistan had a population of 32,979,000, with 79% being Muslim (mostly nondenominational), 16% nonreligious or other, and 5% Orthodox Christian. Uzbeks made up 81% of the population, while Russians were 5.4%, Tajiks 4%, Kazakhs 3%, and others 6.5%. 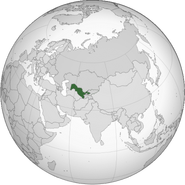 Location
Add a photo to this gallery
Retrieved from "https://historica.fandom.com/wiki/Uzbekistan?oldid=156227"
Community content is available under CC-BY-SA unless otherwise noted.