The Whig Party was a classical liberal and liberal-conservative political party in the United States which existed from 1833 to 1854. The party was formed as a merger of forces opposed to Jacksonian democracy, including the National Republican Party and the Anti-Masonic Party and former Democrats opposed to Andrew Jackson's handling of the 1833 Nullification Crisis. While the Whigs were seen as conservatives during their time due to their perceived elitism, their favoring of capitalism over democracy, and their nativist tendencies, they - unlike their populist Jacksonian rivals - supported modernization, economic interventionism, republican ideals, social reform, and - among many Northerners - abolitionism, making them more liberal than the socially conservative Democrats of the Second Party System.

The Whigs inherited the legacy of the Federalist Party, as they supported a strong central democracy, law and order, and "big business" interests. The Whigs were formed as a coalition of economic modernizers, bankers, businessmen, commercial farmers, evangelical Protestants, Scots-Irish and English immigrants, and Southerners opposed to Jackson's tyrannical policies during the Nullification Crisis; their main bases of support were in industrialized urban centers and among successful planters. The Whigs supported the classical liberal economic system, supporting high tariffs to foment the growth of American factories and supporting the chartering of corporations. However, they also supported interventionism, notably with regard to "internal improvements" to infrastructure, and they also supported a National Bank and paper currency. The Whigs, influenced by the Second Great Awakening, portrayed themselves as a party of moral crusaders who supported public schooling, the abolition of capital punishment, prison and asylum reforms, temperance, anti-expansionism (especially opposition to the forced removal of Native Americans), and women's suffrage, and many northern Whigs were also active in the abolitionist movement. However, their evangelical Protestant roots also led to their staunch opposition to Catholic immigration, seeing Catholic Irish and German immigrants as being agents of "Papism" and therefore threatening American democracy. The Whigs adopted the label "conservative" to signify their support for law and order, social caution, and moral restraint, and they opposed the abolition of property and tax requirements for voting, believing that the best-educated should decide the country's fate, and opposing Jacksonian "mob rule". Despite their elitist social views, they supported a positive role for a strong central government, supported economic liberalism, promoted the moralistic reform movement, and sought to protect the supremacy of the US Congress over the presidency; their very name was derived from the British Whigs, who supported the supremacy of Parliament over the King.

The Whigs were in power from 1841 to 1845 and from 1849 to 1853, with William Henry Harrison (1841), John Tyler (1841-1845), Zachary Taylor (1849-1850), and Millard Fillmore (1850-1853) serving as President. Harrison died just one month after his inauguration, and Tyler, a former Democrat, angered his party by refusing to support the creation of a third national bank and by opposing their tariff proposals. His entire cabinet resigned, and he was nicknamed "His Accidency"; he endorsed the Democrat James K. Polk for President in 1845. The Whigs returned to power in 1849 when Mexican-American War hero Zachary Taylor was elected President, but the acquisition of the "Mexican Cession" led to a major realignment in both parties and the rise of the Third Party System as the slavery debate came to the forefront of American politics. The Whigs, who were united only in their opposition to Jacksonianism, had no united policy on the issue of slavery. In 1840, abolitionist Whigs formed the Liberty Party, while anti-extentionist Whigs formed the Free Soil Party in 1848. Taylor and Fillmore, the last two Whig presidents, attempted to focus on preserving the Union at all costs, agreeing to the Compromise of 1850 and the Fugitive Slave Act, appeasing northerners by declaring California a free state and banning the slave trade in Washington DC and appeasing southerners by allowing for Utah and New Mexico to decide for themselves whether to allow slavery and by undermining the Underground Railroad through the Fugitive Slave Act's restrictions on assisting runaway slaves. However, the Whig Party disintegrated as the slavery debate intensified, with its nativist faction forming the Know Nothings to oppose Catholic immigration and to focus on preserving the union and its southern Cotton Whigs faction forming the Constitutional Union Party to support the union at all costs. President Franklin Pierce's Kansas-Nebraska Act of 1854, which allowed for Kansas and Nebraska to decide for themselves whether to allow slavery, galvanized the anti-slavery cause; soon, the Free Soilers, Libertyites, Know Nothings, the party's northern Conscience Whigs, and anti-slavery northern Democrats united to form the Republican Party, which opposed the extension of slavery, while many southern Know Nothings, Cotton Whigs, and Constitutional Unionists would ultimately join the Democrats during and after the American Civil War, creating a two-party "Third Party System".

Party loyalties in 1845, with yellow being Whig and blue being Democratic Party 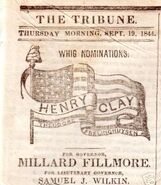 Cotton Whig views
Add a photo to this gallery
Retrieved from "https://historica.fandom.com/wiki/US_Whig_Party?oldid=273434"
Community content is available under CC-BY-SA unless otherwise noted.