The Bronx is the northernmost of New York City's five boroughs, located across the Harlem River from Manhattan and across the East River from Queens/Long Island. The Bronx is named for Jonas Bronck, who purchased the area in 1639; after 1643, the local Lenape natives were displaced by the European settlers. The Bronx was isolated from the rest of the city for years, but West Bronx was annexed into New York City in 1874, and the rest of the Bronx in 1895. During the late 19th and early 20th centuries, immigrants from Ireland, Germany, and Italy moved into the area as it was urbanized, followed by Caribbean immigrants from Puerto Rico, Jamaica, and the Dominican Republic and African-American migrants from the American South. As the Bronx became more densely populated and urbanized, its culture began to form, with hip-hop and Latin music both growing out of the area. The construction of the Cross Bronx Expressway and white flight would lead to the rapid decay of the Bronx, however, leading to a sharp decline in population, livable housing, and the quality of life; a wave of arson followed during the 1960s and the 1970s. The Bronx became one of the poorest and most crime-ridden areas of New York, and crime rates were very high for several decades. During the late 1980s, redevelopment efforts began, and the Bronx slightly improved with each year. In 2015, the Bronx had a population of 1,455,444 people, with 10.5% being white, 30.7% African-American, 4.2% Asian, and 54.6% Hispanic. 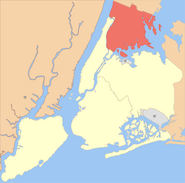 Location of the Bronx

A view of the Bronx from the air, 2008
Community content is available under CC-BY-SA unless otherwise noted.
Advertisement