Sun Shangxiang (died 222 AD) was the daughter of Sun Jian and Lady Wu, the sister of Sun Ce and Sun Quan, and the wife of Liu Bei. She married Liu Bei in 209 AD to cement the alliance between him and her brother Sun Quan in the aftermath of the Battle of Chibi, but, after hearing rumors that her brother had killed Liu Bei in battle at the Battle of Yiling, she drowned herself in the Yangtze River.

Sun Shangxiang was the daughter of Sun Jian and the sister of Sun Ce, Sun Quan, Sun Yi, and Sun Kuang. She was known to be a fierce warrior who assisted her brothers in their conquests, fighting with a bow and arrow. She first meet Liu Bei during the campaign against Yuan Shu in 197, and she later fought alongside him when Liu Bei and Sun Quan allied against Cao Cao in the Battle of Chibi in 208 AD.

After the battle and the ensuing breakdown in relations between Liu Bei and Sun Quan due to disputes over Jing Province, Sun Quan's strategist Zhou Yu arranged for Sun Shangxiang to marry Liu Bei, hoping to use her as a political pawn to seal the alliance. Sun Shangxiang assisted Liu Bei with his conquest of Yi Province from Liu Zhang in 213 AD, and she came to see him as a heroic and benevolent ruler. She was devastated when her brother Sun Quan betrayed the alliance with Liu Bei in 219, and she returned to Wu once war broke out between the two former allies.

Upon hearing a false rumor that her brother had killed Liu Bei at the Battle of Yiling, she drowned herself in the Yangtze River while crying and facing the west (towards the location of the battle). 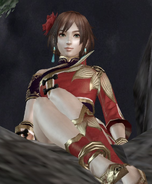 Sun Shangxiang in the battle.
Community content is available under CC-BY-SA unless otherwise noted.
Advertisement