The Roman Empire was a massive empire, centered around the city of Rome and Roman culture, which existed from 27 BC to 395 AD. The empire was founded in 27 BC by Octavian, the nephew of the late Roman statesman and general Julius Caesar, who had overthrown the Roman Senate and became dictator before being assassinated in 44 BC. Octavian defeated Caesar's assassins at the Battle of Philippi in 42 BC and then defeated Caesar's former ally Mark Antony and his Egyptian ally Cleopatra at the Battle of Actium in 31 BC, conquering Egypt and uniting the Roman world under his rule. The Roman Senate then granted him overarching power and the new title "Augustus", effectively making him Emperor.

The first two centuries of the Empire saw a period of unprecedented stability and prosperity, the Pax Romana, and the empire reached its greatest territorial expanse under Emperor Trajan, who died in 117 AD. The empire stretched from northern England to Mesopotamia, dominating the Mediterranean world, Western Europe, North Africa, and the Levant. However, a period of increasing trouble and decline began with the tyrannical reign of emperor Commodus from 180 to 192 AD, and the Crisis of the Third Century threatened the empire's existence, although Aurelian was able to reunite the empire. In an effort to stabilize the empire, Diocletian set up two different courts: one in the east, and one in the west. In 313 AD, Constantine the Great legalized the practice of Christianity, which soon became the dominant religion in the empire; Theodosius' 380 AD Edict of Thessalonia made Christianity the only legal religion in the empire. Shortly after, several Germanic tribes migrated West due to the rampage of the Huns across Central Asia and Eastern Europe. In 395 AD, Emperor Theodosius formally divided the empire between the Western Roman Empire (with its capital at Rome) and the Eastern Roman Empire (with its capital at Constantinople). The Western Roman Empire collapsed in 476 AD after the Heruli king Odoacer deposed Emperor Romulus Augustulus at Ravenna (which had replaced Rome as capital due to two sackings of Rome in the 5th century alone), but the Eastern Roman Empire, later known as the Byzantine Empire, survived until 1453, when the Ottoman Turks conquered Constantinople.

The Roman Empire in 27 BC

The empire at its height in 117 AD 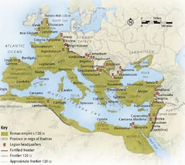 Flag of the Roman Empire
Community content is available under CC-BY-SA unless otherwise noted.