The Catholic Church, unlike the original Christian Church, was highly-centralized and had a rigid hierarchy, with local church congregations being affiliated within parishes, which were affiliated with dioceses, which were administered by Bishops who were given formal jurisdictions of governance over geographic areas determined by the Church. Major dioceses were headed by Archbishops, and the Pope selected Bishops and Archbishops to serve as a council of advisors and as an electoral college, the "College of Cardinals"; this body advised the Pope and elected a new Pope once the office was vacated (usually due to the previous Pope's death). The Catholic Church also differed from the original church in that it only ordained unmarried men as priests, excluding married men and all women from the priesthood; the Church's policies were determined by sacred tradition and by periodic church councils. In addition to the clergy, the Catholic Church also operated through mendicant orders, enclosed monastic orders, and third orders, founding hundreds of monasteries in addition to churches and cathedrals.

The Roman Catholic Church was prone to corruption during the Middle Ages, with some bishops presiding over multiple dioceses (some of which they had never even visited), the Pope holding immense secular and political power due to his ability to crown or excommunicate kings, the Church engaging in secular taxation and the sale of indulgences, and other travesties. The Church's corruption, especially under the Borgia dynasty, led to the Protestant Reformation in 1517, in which Martin Luther, John Calvin, and other Christian reformers sought to restore the original Christian Church and do away with the Roman Catholic Church's corrupt practices. The emergence of Protestantism led to the decline of Catholicism in Northern Europe, parts of Central Europe, and in the British Isles; as the result of the Muslim conquests, the 1054 Great Schism with Orthodox Christianity, and the Protestant Reformation, the Roman Catholic Church was effectively confined to Western and Southern Europe, Ireland, and parts of Eastern Europe. The advent of the Age of Discovery led to the Catholic powers of Spain, France, and Portugal spreading the Catholic faith to the Americas, Africa, and Asia, leading to the rapid growth of Catholicism over the next few centuries. Through missions, diaspora, and conversions, the Roman Catholic Church became the largest Christian church in the world, but the rise of secularism in Europe and North America from the 18th to 21st centuries and the increased persecution of Christians in the Middle East during the 20th and 21st centuries led to parts of North America, Latin America, the Caribbean, and central and southern Africa becoming the main bastions of Catholicism worldwide. 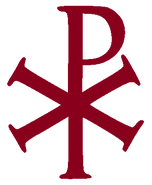 Map of the Reformation by 1555 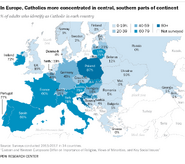 Map of Catholicism in Europe, 2017

The ordination of Catholic priests