Richard I of England

Richard I "the Lionheart" of England (8 September 1157-6 April 1199) was King of England from 6 July 1189 to 6 April 1199, succeeding Henry II of England and preceding John of England. The third son of King Henry II of England and his wife Eleanor of Aquitaine, he was raised in France (there is no evidence that he even understood the English language) and put down rebellions against his father's rule in Poitou at the age of sixteen, although he later took part in a failed rebellion against his father in 1174 with his brothers. Richard would succeed his father on his death in 1189, and Richard took part in the Third Crusade, campaigning in Sicily and Cyprus en route to the Holy Land. Richard intervened in local Sicilian politics, slowing down his advance, and he conquered Cyprus from the Byzantine Empire, granting Cyprus to the Templar Order in 1190.

Although he ultimately failed in his objective of taking Jerusalem from the Saracens, he was famous for his victories against Saladin, including the siege of Tyre and the battle of Arsuf in 1192. Richard made enemies with Leopold V of Austria and Philip II of France while taking part in the crusade, and he was captured while returning home; he was forced to pay a large ransom to his captors in order to be released. Richard was killed by a crossbow bolt while besieging Chalus Castle in Aquitaine while on campaign against the Kingdom of France, and he is a legend in both England and France due to his defense of Christendom and his military genius.

Son of King Henry II and Eleanor of Aquitaine, Richard I was already leading troops at the age of 16. Tall, strong, and fearless, he had a natural aptitude for war. His courage earned him the nickname Coeur de Lion, or "Lionheart". He proved his skills against rebel barons, and also fought against his father. Inheriting the English throne in 1189, Richard saw England as a source of military funding and used the kingdom's wealthy to equip a crusade in 1190. The journey was slow and eventful. In Sicily, Richard intervened in local politics and sacked the city of Messina. He was also delayed in Cyrus, which he seized from its Greek ruler. Finally reaching the Holy Land in June 1191, Richard joined the crusader army that was besieging Acre.

Richard's arrival galvanized the Christian forces, weary from a long siege. Despite becoming seriously ill, he directed the siege operations that brought the city to surrender in July; he was also responsible for the massacre of the surrendered garrison. Marching south from Acre, Richard defeated the Muslim sultan, Saladin, in a battle at Arsuf, but stopped short of attempting the more difficult task of seizing the holy city of Jerusalem - the crusade's main objective. The fighting settled down to low-level skirmishing and sparring. In 1192, after Saladin seized Jaffa, Richard retook the city. It was a surprise assault and he held it against counterattack, leading his knights into the thick of the fight. But such heroics were of no consequence. Richard needed to go home and made a peace with Saladin that left Jerusalem in Muslim hands.

On his way back to England Richard was seized by his sworn enemies the Duke of Austria and the German emperor. His freedom was bought with a huge ransom collected in England. He spent the rest of his life defending his domains in France against Philip II Augustus, showing his usual reckless courage and tactical flair. Richard was hit by a crossbow bolt during a minor siege at Chalus in central France, which resulted in gangrene. He would die from this wound in the arms of his mother.

Richard at the Siege of Acre 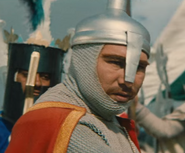 Richard in battle
Add a photo to this gallery
Retrieved from "https://historica.fandom.com/wiki/Richard_the_Lionheart?oldid=316304"
Community content is available under CC-BY-SA unless otherwise noted.