Poland is a country in Central Europe located between Germany to the west and Belarus, Ukraine, and the Baltics to the east. In 966, Mieszko I of Poland created the kingdom of Poland, adopting Catholicism as the religion of the Poles and expanding the Polish nation. Poland reached its height under the Polish-Lithuanian Commonwealth from 1569 to 1772, but it would later be partitioned between Russia, Germany, and Austria, and it would remain divided and under foreign control until 1918. Poland became an independent republic, but it was occupied in 1939 at the start World War II, with Nazi Germany massacring Polish intellectuals, Catholic priests, and Polish Jews. Poland would become independent after the war, first as a communist government that ruled from 1945 to 1989, and then as a capitalist goverment afterwards. On 13 September 1989, Poland became a republic, and Poland has since become one of the fastest-rising economies in post-communist Europe. Its capital is Warsaw, and it is divided into sixteen "voivodeships", the Polish term for "provinces". In 2014, Poland had a population of 38,483,957 people, with almost all of them being Catholic Poles; Poland is one of the least-diverse countries on Earth. However, its rich history and its scenic beauty has led to Poland becoming a popular tourist destination. 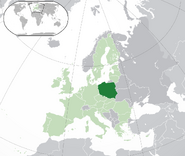 Population in 1993
Community content is available under CC-BY-SA unless otherwise noted.
Advertisement