Peru is a country in western South America, bordering Colombia and Ecuador to the north, Brazil and Bolivia to the east, and Chile to the south. The country gained its independence from Spain in 1821, and the 1824 Battle of Ayacucho confirmed Peruvian independence. The country had a low military profile and was in recession until the mid-19th century, when an economic boom due to the exploitation of natural resources led to the country becoming stronger. Peru's military was destroyed in the War of the Pacific, and the country moved from oligarchy to democracy after the defeat in the War of the Pacific. Since then, Peru has gone through periods of political unrest and internal conflict in addition to economic successes and stability, with the 20th century seeing Peru become involved in the Cold War. Juan Velasco Alvarado briefly led Peru towards socialism, but a United States-supported coup toppled him and spread American imperialism to Peru once more. Since then, the Shining Path revolutionary movement has waged guerrilla warfare against the government, whose leader Alberto Fujimori was corrupt. Eventually, Ollanta Humala's socialist Peruvian Nationalist Party took power, and the Peruvian government renewed peace negotiations with the Shining Path movement. In 2015, Peru had a population of 31,151,643 people, with 45% being Native Americans, 37% mestizo, 15% white, and 2% others. 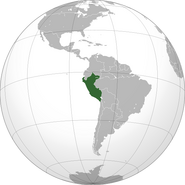 Population in 1946
Community content is available under CC-BY-SA unless otherwise noted.
Advertisement