The Papal States was an independent nation led by the Pope from the city of Rome, Italy from 751 AD to 1870. Holding power over the Catholic Church, the Pope was powerful, and his city-state survived for over one thousand years. The Papal States were first established when Pepin the Short, king of the Franks, defeated the Lombards in northern Italy and gave the Pope his conquered lands. The states would exist until around 1797, when the French of Napoleon Bonaparte conquered the region. Afterwards, papal power was confined to the immediate surroundings of Rome, which would fall to the Royal Italian Army in 1870 as the French troops protecting Rome were withdrawn to fight in the Franco-Prussian War.

The Papal States were centered on the capital of Rome, the seat of the Catholic Church. The Pope declared primacy over all Christians in 451 AD, a controversial decision that resulted in the split of Roman Catholicism and Orthodox Christianity. Led by the Pope and holding hegemony over most of Western Europe, the Papal States were flushed with riches and supported by foreign armies of pious rulers such as the King of France. They displayed their power through building large cathedrals with indulgence money, and by declaring crusades against nonbelievers. In the Crusades (1096-1291) many peasants, afraid that they would not go to heaven, agreed to redeem themselves by fighting and killing Moors and Saracens. However, their power over the Catholic church was always made non-absolute by their rivalry with the Holy Roman Emperor, who could elect bishops to hold sway over many cities across Germany and Italy.

With the Renaissance, however, they lost their influence. Education was no longer confined to monasteries as secular learning started with schools, and Protestantism took over Northern Europe from Catholicism. Eventually the Pope became confined to Italy, with the French and Spanish invading Italy in the Italian Wars of 1494-1521.

During that time, the House of Borgia candidate Rodrigo Borgia became Pope Alexander VI, and the incestuous and corrupt Borgia family promoted favorites and wiped out opposition. Cesare Borgia, the Pope's son, waged campaigns in Romagna against Venice and the House of Orsini from 1500 to 1503 with help from the Kingdom of France's Baron de Valois and his army. The Papal States were aided by Leonardo Da Vinci, who invented many war machines with which to wage war against other Italian states. However, these war machines were destroyed in 1503. That same year, Rodrigo Borgia said that the followers of Girolamo Savonarola would face charges of heresy and they would meet the same fate as him if they did not stop burning books and preaching heretical ideas. Also, the Papal States Army was built up, with people deserting the army facing public shame in the stocks. Indulgences for the sake of adultery were tripled in cost because the low costs were believed to encourage the practice of the crime. The funds would be used to build a monument to Pope Alexander.

The Borgia fell in 1503 when Pope Julius II came to power; the former Giuliano Della Rovere was an enemy of the Borgia, and he had General Cesare Borgia arrested for treason, murder, and incest. Cesare had poisoned his father for attempting to kill him in retaliation for the failure of his campaigns in Romagna, and he fled to Spain, where he was killed in 1507. The Borgia towers around Rome were blown up by the Assassin Order and they flew the flag of golden keys on a red field as a sign of resistance during the Liberation of Rome. The Borgia influence was eliminated by 1504, and the Papal States returned to peace.

Their final power was broken when France occupied Rome in the 1790s. The Papal States had allied with the Austrian Empire to oppose the French revolutionary government, which eliminated priests and declared the country nonreligious. Marshal Louis Gabriel Suchet captured Ancona and later occupied Rome itself in 1797, bringing an end to the Papal States' army. Rome was a non-military power from then onwards, and in 1848 the French army had to reinstate the Pope after a rebellion installed the Republic of Rome. In 1870 the small French legion protecting the city left, allowing the Kingdom of Sardinia to march into the city and capture it, completing their wars of Italian Unification. From then on, only the Vatican City portion of Rome was the seat of the papacy; the rest belonged to the new kingdom of Italy. 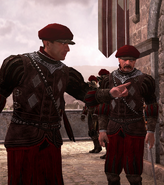 Population in 1836
Add a photo to this gallery
Retrieved from "https://historica.fandom.com/wiki/Papal_States?oldid=111818"
Community content is available under CC-BY-SA unless otherwise noted.