The Islamic Republic of Pakistan is a federal parliamentary republic located in South Asia's Indian Subcontinent, with its capital at Islamabad. Pakistan was declared on 14 August 1947 in response to India's declaration of independence that same year. In 2014, it had a population of 196,174,380 people.

On 14 August 1947, after the pro-United Kingdom Muslim League and the Indian National Congress of the newly-independent India could not agree on forming a united India, Muslims set up the independent Muslim nation of Pakistan in the northwest. Pakistan's first leader was Muhammad Ali Jinnah, who played a major role in the independence movement. The new country was made up primarily of Muslim Indians, Baluchs, Gujaratis, and Pashtuns, while there was still a Sikh and Christian minority.

Pakistan was formed out of former Indian princely states that voted to join the new Dominion of Pakistan. States such as Makran, Kalat, Sindh, and Panjab voted to join Pakistan, as they had Muslim majorities. In addition, the enclave of East Pakistan on the opposite side of the Indian Subcontinent, 1,100 miles away from the rest of Pakistan, voted to join Pakistan due to its Muslim Bengali majority. However, Maharajah Hari Singh of Kashmir and Jammu decided to join India in October 1947 although three-quarters of his population was Muslim, and the region's Muslim tribesmen fought the Hindus to the south in a civil war. The Pakistani Army moved in to support their separatist tribal allies, while the Indian Army was sent in after India appealed to the United Nations for support, saying that Pakistan was the aggressor. The war ended in January 1949 after a brief war, the First Indo-Pakistani War. The war left a legacy of hatred between the two countries that still persists today.

On 23 March 1956, Pakistan became the "Islamic Republic of Pakistan" and was no longer a dominion of the United Kingdom, becoming fully-independent (Queen Elizabeth II of Britain could not use the title "Queen of Pakistan" anymore). Pakistan renewed its Kashmir conflict with India in the Second Indo-Pakistani War of 1965, with both sides fighting in Kashmir, Punjab, and the Rann of Kutch until the Treaty of Tashkent in 1966.

The final major Indo-Pakistani war took place in 1971, when East Pakistan declared independence as the new country of "Bangladesh" under Mujibur Rahman. India allied with Bangladesh and the Third Indo-Pakistani War and the Bangladeshi War of Independence coincided from 26 March to 3 December 1971. The result was an Indian victory due to a series of tank battles on the border with West Pakistan, and Pakistan recognized Bangladesh as independent in 1974. Pakistan lost a huge portion of its population, but Bangladesh and Pakistan became indifferent in the future.

Pakistan underwent radical political changes in 1977, when Zulfikar Ali Bhutto's Pakistan People's Party socialist government was overthrown in a coup d'etat by Muhammad Zia-ul-Haq, who encouraged Islamism. The new government of Pakistan grew more Islamic, and during the 1980s they supported the Mujahideen of Afghanistan in fighting the Soviet Union during the Soviet-Afghan War, seen by many as an Islamic war. Pakistan gave its support to the Taliban Islamic extremists in the Afghan Civil War that followed, as the moderate Northern Alliance of Tajiks, Uzbeks, and Hazaras resisted the Pashtun-majority Taliban terrorists. The Taliban took over in 1996 with the support of the ISI of Pakistan, and the Taliban established an emirate that beheaded dissidents at soccer games and played soccer with their heads. The brutal Taliban regime was aided by Pakistan until its overthrow in 2001 by the United States.

In 1999, Pakistan fought India another time in the Kargil War, which was a brief conflict over the Kargil region. The war was quick and ended with the status quo being preserved, although tensions increased between Pakistan and India. Soon, Islamic extremism became a problem. Islamic extremists operating out of Pakistan targeted several cities in India, including Mumbai, where attacks in 2006 and 2008 each killed 200 people. India blamed Pakistan for not cracking down on extremist groups based in the country, and al-Qaeda leader Osama Bin Laden and several key al-Qaeda leaders hid out in the country's Federally Administered Tribal Areas (FATA) and Khyber Pakhtunkhwa, two tribal regions home to the Pashtun minority.

In 2004, Pakistan underwent a chaotic era. The Tehrik-i-Taliban Pakistan (TTP) branch of the Taliban in Afghanistan began an insurgency in Pakistan, hoping to implement their interpretation of sharia law on Pakistan and to unite against the ISAF in Afghanistan. Led by Baitullah Mehsud, among others, the TTP carried out several suicide bombings and terrorist attacks in Pakistan. The Pakistani Army launched several offensives against the Taliban, but the TTP, TNSM, and other militant groups made considerable gains in the country. Swat Valley was taken over by Maulana Fazlullah's TNSM and was ruled by sharia law - music, dancing, TVs, CDs, computers, the shaving of beards, and the education of girls were made illegal. Pakistan's armed forces attacked the militants across the country, although they continued to suffer from many attacks. The United States' CIA launched drone strikes against the militants on their own initiative, although many civilians were killed in these strikes as well. Pakistan-US relations decreased after it was found out that Osama Bin Laden lived in a compound a mile away from the military academy in Abbottabad, Pakistan's version of West Point. However, the Pakistanis continued to fight the militants on the ground, and the CIA continued to bomb them.

In 2014, Pakistan had a population of 196,174,380 people, with 96.4% of them being Muslims and 3.6% being others, such as Sikhs, Christians, Jainists, Buddhists, and Hindus. 44.15% of the population were Punjabis, 15.42% were Pashtuns, 14.1% were Sindhis, 10.53% Seraikis, 7.57% Mujahirs, and 3.57% Baluchs. The national language of Pakistan was Urdu, although Pashto, Gujarati, Baluchi, and other languages were spoken in the tribal areas. English was intermediately understood by 49% of the population, and it was the formal language for all documents and contracts. 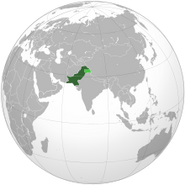 Ethnic map of Afghanistan and Pakistan

Population in 1992
Community content is available under CC-BY-SA unless otherwise noted.
Advertisement