The Oda were a feudal Japanese samurai clan from Owari Province, descended from the Taira clan. Taira Chikazane established himself in the city of Oda in Echizen Province and took the city as his name, and his Shiba descendants established themselves in Owari. Nagoya became their capital, with Kiyonasu as their major castle. Nobunaga Oda would lead the Oda to supremacy over most of Japan by his death in 1582, but a succession war between Hideyoshi Hashiba and other Oda generals such as Ieyasu Tokugawa, Mitsuhide Akechi, and Katsuie Shibata (who all backed Oda family members) tore the clan apart, but they survived into the Edo Period (1603-1868) and were given the Tendo Domain. 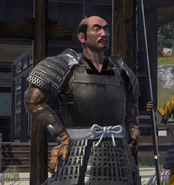 Oda army
Add a photo to this gallery
Retrieved from "https://historica.fandom.com/wiki/Oda?oldid=109225"
Community content is available under CC-BY-SA unless otherwise noted.