Mongolia is a landlocked country in East Asia, located to the north of China and to the south of Russia. With its capital at Ulaanbaatar, Mongolia is still mostly undeveloped, with 30% of its population of 3,000,000 people still living a nomadic lifestyle as the Mongols of old did. The country has little arable land, and much of the country consists of grassy steppe, the Gobi Desert, and some mountain ranges. In 1992, Mongolia became a market economy after the fall of the Mongolian People's Republic, but state atheism still influences the culture of Mongolia. 53% of the population is Buddhist, 38.6% non-religious, 3% Muslim, 2.9% Tengri, 2.1% Christian, and .4% other religions. 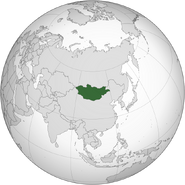 Location of Mongolia
Add a photo to this gallery
Retrieved from "https://historica.fandom.com/wiki/Mongolia?oldid=58352"
Community content is available under CC-BY-SA unless otherwise noted.