Milwaukee is the largest city in Wisconsin and the seat of Milwaukee County. The area was first settled in 1818 by French-Canadian fur trader Solomon Juneau, and Milwaukee was founded as the merger of two towns on 31 January 1846; its name means "pleasant land" in Algonquian. During the 1840s and 1850s, German immigrants arrived in large numbers, and, by 1900, 34% of its population was of German descent (mostly from Prussia, followed by Bavaria, Saxony, Hanover, and Hesse-Darmstadt), and it was nicknamed "the German Athens of America". A large Polish community also developed, and Milwaukee was home to 100,000 Poles in 1915. Other immigrants came from Lithuania, Italy, Ireland, France, Russia, Bohemia, and Sweden, ncluding Jews, Lutherans, and Catholics. From 1900 to 1960, Milwaukee was the main stronghold of the Socialist Party of America. In 2018, Milwaukee had a population of 594,511 people. 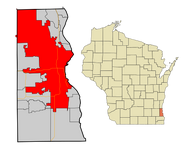 Population in 1836
Community content is available under CC-BY-SA unless otherwise noted.
Advertisement