Shot in the chest

Imperial German Army
Manfred von Richthofen (2 May 1892-21 April 1918), also known as "the Red Baron", was an Imperial German Air Service fighter ace during World War I. He was regarded as a German national hero and was respected by his enemies, as he was known to see himself as a sportsman rather than a killer. In 1918, Richthofen was shot down and killed near Vaux-sur-Somme.

Manfred von Richthofen was born in Breslau, Silesia, German Empire (now Wroclaw, Poland) on 2 May 1892, the son of Major Albrecht von Richthofen, and the older brother of Lothar, a fellow fighter ace. In 1911, he joined an uhlan cavalry unit of the Imperial German Army, and he served as a cavalry reconnaissance officer on both the Eastern and Western fronts of World War I. With the introduction of trench warfare, his unit was dismounted and sent to serve as dispatch runners and phone operators, and Richthofen was incensed when he was sent to serve in a supply unit rather than fight. After writing a request for a transfer in which he said that he did not go to war in order to collect cheese and eggs, he successfully switched to the Imperial German Air Service. He convinced Lothar to do so as well, and he scored his first kill at the Battle of Verdun.

In October 1916, Richthofen witnessed his pilot hero, Oswald Boelcke, be killed in a midair collision with a friendly aircraft, and he sought to succeed Boelcke as the second German fighter ace. On 23 November 1916, Richthofen shot down his most famous adversary, British ace Lanoe Hawker, who was described by Richthofen as "the British Boelcke". He was awarded the Pour le Merite after this victory, and he soon became more famous than Boelcke, appearing in headlines across Germany. In January 1917, he assumed command of Jagdstaffel 11, which included several elite German pilots and many future squadron commanders. After taking command of his own squadron, he also painted his fighter plane red in order to distinguish his aircraft from those of his squadmates, and he was nicknamed "the Red Baron" for his inherited title of "Baron von Richthofen" and for his red plane. In "Bloody April" of 1917, he shot down 22 British aircraft (including four in a single day), raising his official tally to 52.

In June 1917, Richthofen became commander of Jagdgeschwader 1, a fighter wing consisting of four squadrons, and it was nicknamed "the Flying Circus" due to its brightly colored aircraft and its mobility. On 6 July 1917, Richthofen would suffer a serious head wound over Wervicq, with Donald Cunnell having forced him down; just six days later, Cunnell was shot down and killed. During his convalescent leave, Richthofen wrote an autobiography, The Red Fighter Pilot. By 1918, he had become such a legend that the German military did not want to let him return to air combat, as his death would be a blow to the morale of the German people. It was also rumored that the Allies had created squadrons with the express aim of killing Richthofen, with the Victoria Cross being promised to the man who shot him down.

While still dedicated to serving alongside his unit, Richthofen would become distant and often ill-tempered since having received his head injury. Having never fully recovered from lasting effects of persisting pains it brought him, he continued to fly in hopes of witnessing a German victory nonetheless.

On 21 April 1918, Richthofen flew his final combat mission, occurring over the Morlancourt Ridge near the Somme River and the town of Vaux-sur-Somme. He pursued Canadian pilot Wilfrid May's Sopwith Camel after May had fired on Manfred's cousin Wolfram von Richthofen, saving Wolfram's life. However, Canadian ace Roy Brown proceeded to pursue Richthofen, and Australian soldier Cedric Popkin fired a Vickers machine-gun at Richthofen from the ground. Richthofen was mortally wounded by a single bullet that damaged his heart and lungs so severely that he died a quick death, but not before he made a rough landing in a field near Vaux-sur-Somme. Allied squadrons presented memorial wreaths at his grave in Bertangles, near Amiens, as he was a hero to Germans and a respected enemy to the Allies. 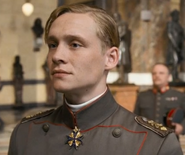