Start a Wiki
watch 01:50
The Loop (Games)
Do you like this video?
The Kingdom of the Lombards was an early medieval state established by the Germanic Lombards in Italy, existing from 568 to 814. The Lombards began their conquest of Italy under Alboin, and they established their capital at Pavia. The king was traditionally elected by the highest-ranking aristocrats, the dukes, as several attempts to establish a hereditary dynasty failed. The kingdom was divided into semi-autonomous duchies, while gastalds held municipal power. The southern duchies, namely those of Benevento and Spoleto, had considerably more autonomy than those lying to the north of the Byzantine Empire's Duchy of Rome and the Exarchate of Ravenna. Over time, the Lombards adopted Roman names, titles, and traditions, and the Lombardic language, dress, and hairstyles had all gone extinct by the late 8th century. By the end of the 7th century, almost all Lombards were Catholic, but their conflict with the Popes led to the Frankish king Charlemagne invading Italy in 774. Charlemagne adopted the title "King of the Lombards", although he never managed to conquer Benevento. In 814, the Kingdom of Lombards was divided between Frankish Italy, the Principality of Benevento, and the Papal States. 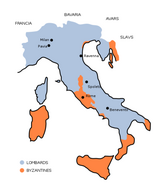 Italy in the 700s
Add a photo to this gallery
Retrieved from "https://historica.fandom.com/wiki/Kingdom_of_the_Lombards?oldid=114290"
Community content is available under CC-BY-SA unless otherwise noted.