watch 03:41
Wiki Targeted (Games)
Do you like this video?
Play Sound

Ieyasu Tokugawa (31 January 1543 – 1 June 1616) was the daimyo of the Tokugawa clan and founder of the Tokugawa Shogunate, which he ruled from 1603 to 1616, preceding Hidetada Tokugawa. Considered to be the last of the "Three Great Unifiers" of Japan, Ieyasu won control of Japan in the 1600 Battle of Sekigahara.

The founder of the Tokugawa Shogunate was the son of a minor daimyo. His clan, the Mikawa, was split between supporters of its two powerful neighbors, the Imagawa and Oda clans. As a child, Ieyasu was seized by the Oda and narrowly escaped execution when his father persisted in backing the Imagawa.

The child returned to his family with a fixed determination to survive in a dangerous world. He first proved himself a valiant samurai while still a youth, at the Siege of Terabe in 1558, an action fought on behalf of the Imagawa. When Nobunaga Oda crushed the Imagawa at Okehazama two years later, however, Ieyasu's troops kept well away from the fighting. In the wake of the battle, he nimbly changed sides and fought as Nobunaga's ally at the battle of Anegawa in 1570. Ieyasu did not lack physical courage, but his most salient characteristics were patience and cunning. In 1572, defeated in a conflict with the Takeda clan at Mikatagahara, he skillfully avoided further fighting until Nobunaga was lured into throwing his superior forces into battle against the Takeda at Nagashino in 1575.

At the time of Nobunaga's death in 1582, Ieyasu reacted cautiously at first to Hideyoshi Toyotomi's swift seizure of power, before taking up arms on behalf of a rival claimant in 1584. When Hideyoshi and Ieyasu's forces met at Nagakute, Ieyasu had the better of the fighting, but he avoided a decisive showdown, stalling for time until a truce could be arranged. He then recognized Hideyoshi's authority, all the while building up a power base around Edo (modern-day Tokyo).

Ieyasu did not participate in Hideyoshi's disastrous campaigns in Korea, instead, husbanding his strength for the inevitable succession struggle. On Hideyoshi's death in 1598, he laucnhed his bid for power, opposed by a faction led by Mitsunari Ishida. Ieyasu took pains to suborn various daimyo allied to Mitsunari. When battle was joined at Sekigahara in October 1600, many contingents switched sides to join Ieyasu, ensuring his victory.

Birth of a dynasty

Ieyasu founded the Tokugawa Shogunate in 1603, a date generally accepted as the end of Japan's civil wars. However, the fighting was not quite over. In 1614, supporters of Hideyoshi's son, Hideyori Toyotomi, rose in revolt. Ieyasu responded with an implacable marshaling of his forces to overwhelm the rebels. After a lengthy siege of Osaka castle, the revolt was ended with the battle of Tennoji in 1615. Ieyasu died the following year, but the shogunate he founded was destined to rule Japan for two and a half centuries.

Ieyasu after the Battle of Okehazama 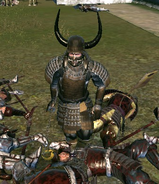 Ieyasu at the Siege of Osaka
Add a photo to this gallery
Retrieved from "https://historica.fandom.com/wiki/Ieyasu_Tokugawa?oldid=332346"
Community content is available under CC-BY-SA unless otherwise noted.