The Hellenic Republic, better known as Greece, is a country in Southern Europe. Located at the crossroads of Europe, Asia, and Africa at the southern tip of the Balkans, Greece consists of land along the Mediterranean Sea region in addition to several islands in the Aegean Sea. The country consists of the regions of Greek Macedonia, Central Greece, Thessaly, Peleponnese, Epirus, the Aegean Islands, Thrace, Crete, and the Ionian Islands. Greece is a mixture of long coastlines and mountains, in addition to having 227 populated islands. In 2015, Greece had a population of 10,955,000 people, with 97% belonging to the Orthodox Christian church, 1% to Islam, and 2% to other religions such as Catholicism, Judaism, paganism, and Hinduism. 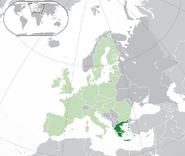 Location of Greece
Community content is available under CC-BY-SA unless otherwise noted.
Advertisement