The Federal Republic of Germany is a federated republic in Central Europe, composed of 16 states. Germany's largest city is its capital of Berlin, and it has a large population of 81,500,000 people, becoming the second-largest migrant destination after the United States. Germany has the fourth-largest GDP on Earth, with a 35-hour work week, free education, and cheap healthcare. Germany was united in 1871 under the German Empire, and in 1918 it was replaced by a republic following the German Revolution after World War I. Germany was transformed into a fascist state, using racist ideology and right-wing populism to gain a large support base for Adolf Hitler, the leader of the Nazi Party. Consequentially, Germany sought to expand across Europe, leading to World War II and the devastation of Germany, which resulted in Germany being divided into the Western Allies-occupied West Germany and the Soviet-occupied East Germany. From 1945 to 1989/1990, Germany was divided between a capitalist west and a communist east, but the end of the Cold War made it unnecessary to maintain the division of Germany with the Iron Curtain and Berlin Wall. In 1990 Germany was reunified as a federal republic, and it has a very high standard of living as of 2016, with one of the highest economies. Social security and universal healthcare are tenets of modern German economics, allowing for Germany to emerge as a world power. 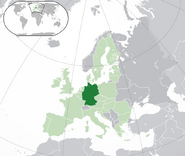 Location of Germany in Europe

Population in 1992
Community content is available under CC-BY-SA unless otherwise noted.
Advertisement