View source
watch 02:53
GTA: The Criminal Enterprises - The Loop
Do you like this video?
Play Sound

The German Empire existed from 1871 to 1918, existing from the unification of Germany in 1871 by Kaiser Wilhelm I of Germany until the abdication of Kaiser Wilhelm II of Germany at the end of World War I in 1918. The empire was formed in the aftermath of the Franco-Prussian War, and it succeeded the North German Confederation that had previously existed in the 1860s. The empire was centered around the dominant state of Prussia, inheriting its capital of Berlin and its military traditions. The empire unified the former German states and existed until the defeat of Germany by the Triple Entente in 1918 in World War I, and the November Revolution forced Kaiser Wilhelm to abdicate, followed by the establishment of the Weimar Republic.

The German Empire was a culturally diverse nation, as it controlled lands in what is now Germany, France, the Czech Republic, Denmark, Russia, and Poland during its existence. 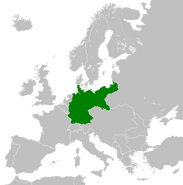 Population in 1871
Community content is available under CC-BY-SA unless otherwise noted.
Advertisement