Freddie Thorne (1884-1921) was a British communist union convenor from Birmingham. He was affiliated with the Peaky Blinders gang.

Freddie Thorne was born in 1884, and he lived on 26 South Street in the Small Heath neighborhood of Birmingham, England. He befriended Tommy Shelby during their youths in Small Heath, and he served alongside him during World War I as a British Army sergeant, saving Shelby's life. After the war, he became a union convenor at the Birmingham Small Arms (BSA) factory, and he became a communist agitator who sympathized with the Bolsheviks. Thorne's friendship with Tommy Shelby fell out when Thorne became a communist, but they remained indifferent to each other. He secretly dated Tommy's sister Ada, fathering a child with her and secretly marrying her before being forced into hiding by a police crackdown on the Peaky Blinders gang. Thorne was sprung from captivity after Danny Whizz-Bang bribed one of his captors on the prison van to help him escape as he was being taken to the Brixton prison in London, and he later reunited with Shelby during his confrontation with Billy Kimber's men. Thorne died of the Spanish Influenza in 1921. 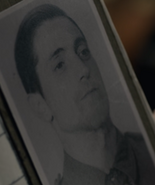 Thorne during the war
Community content is available under CC-BY-SA unless otherwise noted.
Advertisement