View source
watch 02:53
GTA: The Criminal Enterprises - The Loop
Do you like this video?
Play Sound

The French Republic, better known simply as France, is a country located in Western Europe, with its capital being Paris. The country also owns several overseas colonies such as French Guiana, Reunion and Mayotte, New Caledonia, and French Polynesia, the last remains of a former colonial empire that once included Canada, a third of what is now the United States, Southeast Asia, and almost all of Africa north of the Equator. France's name comes from the Franks, a Germanic tribe that settled in France in the 5th century after the fall of the Roman Empire, and it became one of the most powerful nations in Europe due to the might of French kings such as Charlemagne, Philip II of France, and Louis XIV of France.

France was a center of Enlightenment (being home to Rousseau, Voltaire, and other thinkers), art (with Matisse, Dumas, and other writers, painters, and artists living in France, especially Paris), and republicanism (France's French Revolution and the Declaration of the Rights of Man influenced the development of revolutionary causes in many countries), but New York City would eventually replace Paris as the center of art, and France has since moved on. French politics as of 2016 is dominated by clashes between far-right and anti-Semitic extremists such as Marine Le Pen, conservatives such as Nicholas Sarkozy, and socialists such as Francois Hollande, with tensions between ethnic groups being displayed in some anti-Jewish acts of violence, Islamic extremist attacks, and far-right demonstrations against Muslims and Jews by radical French people testifying to the hatred in France. 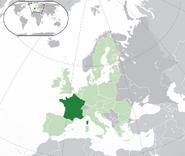 Population in 1992.
Community content is available under CC-BY-SA unless otherwise noted.
Advertisement