Flagstaff is a city in and the county seat of Coconino County, Arizona. It was settled in 1876 and named for the stripped pine tree on which the US flag was first raised. During the 1880s, Flagstaff opened its first post office and attracted the railroad industry, and it had become the largest city on the Albuquerque-West Coast railroad by 1886. In 1896, the Lowell Observatory opened in Flagstaff, and the observatory's telescope discovered Pluto in 1930. The city grew rapidly due to its connection to the railroad, and US Route 66 was completed in 1926, running through Flagstaff; two years later, Flagstaff was incorporated as a city. It grew and prospered through the 1960s, but many businesses started to move from the city center during the 1970s and 1980s, leading to economic and social decline. In 1987, however, the city drafted a new master plan and reinvented itself, building a new city hall, library, and county administrative building. In 2016, Flagstaff had a population of 71,459 people. 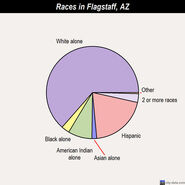 Population in 1924
Community content is available under CC-BY-SA unless otherwise noted.
Advertisement