Eriador was, in J.R.R. Tolkien's interpretation of Norse mythology, a large region of northwestern Middle Earth located between the Blue Mountains to the west and the Misty Mountains to the east (with a width of 600 miles). During the Second Age, Men cleared Eriador's forests for farming, and, by the Third Age, Eriador was ruled by the kingdom of Arnor; Arnor later fragmented and was conquered by Angmar, and, by the time of the War of the Ring, Eriador was inhabited by the Elves of Rivendell and Lindon, the Dunedain (Men of Numenor) of the Angle, the "Middle Men" in Bree, the Hobbits of the Shire, the Dwarves of the Blue Mountains, and the Orcs of the Misty Mountains. During the Fourth Age, King Aragorn of Eriador reunited Gondor and Arnor, and Eriador became part of his realm. 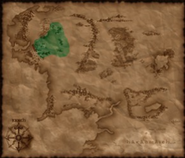 Location
Community content is available under CC-BY-SA unless otherwise noted.