The Kingdom of England was a sovereign state in the British Isles from 927 to 1707, with London serving as its capital. England was formed in 927 after King Aethelstan of Wessex united the Anglo-Saxon kingdoms and drove out the Vikings. Anglo-Saxon rule was brought to an end in 1066 during the Norman Conquest. King William the Conqueror brought several Norman nobles with him to England, and a new English culture was developed: it was a mixture of the Germanic Anglo-Saxon traditions, Norse ethnicity, and the French-originating Norman language. Nevertheless, the Wessex bloodline continued to live through the centuries, still existing as part of the British royal family.

Wessex, established by the House of Cerdic in 519, rose as the prominent kingdom following the defeat of Mercia and the coronation of Alfred the Great as "King of the Anglosaxons" in 886. His grandson Aethelstan unified the rest of anglosaxon kingdoms, creating the Kingdom of England on 12 July 927. Unlucky for his successors, the kingdom was a target of constant waves of viking invasions. In 1013, England was briefly taken by the North Sea Empire, but it was liberated by Edward the Confessor in 1042. However, the stability of the kingdom was again threatened after his death, which sparked a succession crisis that led directly to the Norman Conquest of 1066.

Due to the House of Normandy's inheritance of the throne, England was united with the Duchy of Normandy and other possessions in France, causing perpetual conflict between the Kingdom of England and the Kingdom of France. The Norman monarchs initiated the conquest of Ireland during their reign, and they also waged some campaigns against France. In 1135, the death of the last Norman monarch, Henry I of England, led to the Norman nobleman Stephen of Blois taking the throne. England devolved into "The Anarchy", which ended in 1153 after King Stephen made peace with the nobles who had risen against him; he gave the succession to the throne to the House of Plantagenet. King Henry II of England, the first Plantagenet monarch and descended of the House of Cerdic, ruled over England and larger swaths of France, creating the Angevin Empire. Under the Plantagenets, England was constantly at war with France or its British Isles neighbors of Scotland, Wales, and Ireland. England conquered Wales in 1282, but King Edward I of England failed to conquer Scotland, which formed the "Auld Alliance" with France and successfully fought off English invasions. England's conquest of Ireland would not be complete until the 16th century. From 1337 to 1453, the House of Plantagenet attempted to conquer France as well, with King Edward III of England - the son of Princess Isabella of France - claiming that he was the true successor to the House of Capet, and not the new House of Valois monarchs of France. The Hundred Years' War resulted in a defeat for England, and the political chaos in England that followed would lead to the "Wars of the Roses". In 1487, the House of Tudor seized power from the Yorkist branch of the House of Plantagenet after the Battle of Bosworth Field.

The Tudor dynasty continued to lay claim to the throne of France, and it was not until 1603 that the English royal standard ceased to feature the flag of France. King Henry VIII of England took part in several European wars with France or Emperor Charles V during the Italian Wars, and he also launched campaigns against France's ally of Scotland, leading to decisive victories at the Battle of Flodden in 1513 and at the Battle of Solway Moss in 1542. During Henry's reign, the English Reformation began in response to Henry's break from the Catholic Church over his divorce of Catherine of Aragon. Henry proclaimed himself the head of the Church of England, a nominally Protestant church that kept many of the organizational features of Catholicism. Catholics were persecuted, while Calvinists and Lutherans would later be persecuted as well due to their opposition to the Church of England's Catholic influences. After Henry died in 1547, King Edward VI of England ruled briefly, but he died young in 1553, leading to Queen Mary I of England taking power. Mary, a Catholic, defeated and killed rival claimant Lady Jane Grey and persecuted Protestants, leading to the execution of Archbishop of Canterbury Thomas Cranmer and several other enemies. When she died in 1558, "Bloody Mary" left the throne to her Protestant sister, Elizabeth I of England, who finally ended the Catholic Church's official role in English society. Elizabeth waged war on the Catholic Spanish Habsburgs during the Anglo-Spanish War of 1585-1603, and she defeated the Spanish Armada, an attempt by Mary's widower Philip II of Spain to restore a Catholic to the throne of England. Under her reign, Ireland was also fully conquered.

Upon her death in 1603, the childless Elizabeth was succeeded by her cousin James VI of Scotland, whose House of Stuart became the new ruling dynasty. King James ruled England, Scotland, Ireland, and Wales in a personal union, finally uniting the British Isles without warfare. He believed in the "divine right of kings", and his son Charles I of England made the mistake of believing that he was ruling an absolute monarchy, when, in fact, England was a constitutional monarchy under the Magna Carta. His attempts to mute Parliament's power led to the English Civil War, during which he was overthrown and beheaded, and the Parliamentarians, led by Oliver Cromwell, established the English Commonwealth and The Protectorate. England fought against both the Spanish and the Netherlands for control of trade, but the Anglo-Dutch Wars would end in failure. In 1660, King Charles II of England was restored to the throne with popular support, as the people of England had tired of Cromwell's dictatorial rule, and took the opportunity to end his "republic" after his death. Charles and his successor, King James II of England, allied with France due to their Catholic sympathies, and they continued to fight against the Netherlands. In 1688, the Protestant nobility of England, afraid that James might restore the Catholic Church to power, invited the Dutch ruler William of Orange to invade England, and he seized power in the "Glorious Revolution". William of Orange became the ruler of all of Great Britain and the Netherlands, uniting their colonial empires together. He now allied with the Holy Roman Empire and Spain against France during the War of the Grand Alliance in the 1690s, and he also defeated the Jacobite supporters of the ousted Stuart monarchy at the Battle of the Boyne in Ireland. He then led his realms into the War of the Spanish Succession in 1702, fighting against France and a Bourbon-ruled Spain. After William's death, Queen Anne ascended the throne, and she was intent on formally uniting England, Ireland, Scotland, and Wales. Under the Acts of Union 1707, the kingdoms of England (including England, Ireland, and Wales) and Scotland united to form "Great Britain". 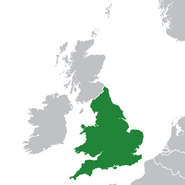 Location of England in 1700 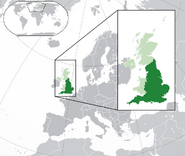 Flag of the Plantagenet dynasty

Flag after the 13th century

Family tree of English monarchs, from Cerdic of Wessex to Alfred the Great (519–899)

English and British monarchs from Alfred the Great to Elizabeth II of Britain (871–present)
Add a photo to this gallery
Retrieved from "https://historica.fandom.com/wiki/England?oldid=291917"
Community content is available under CC-BY-SA unless otherwise noted.