Historica Wiki
Register
Don't have an account?
Sign In
Advertisement
in: 385 BC births, 330 BC deaths, Persians,
and 9 more

Darius III Codomannus (385 BC-330 BC) was Shah of the Persian Empire from 336 BC to 330 BC, succeeding Artaxerxes IV and preceding Artaxerxes V. Darius fought against the military genius Alexander the Great of Macedon for his entire reign, and he was defeated by him at the Battle of Issus in 333 BC and the Battle of Gaugamela in 331 BC. He was betrayed and killed by his rebellious satrap Bessus in 330 BC.

Sometimes military commanders are truly unfortunate in the opponents they encounter. This was undoubtedly the case for Darius III, whose defeats at the hands of a military genius, Alexander of Macedon, brought Achaemenid rule in Persia to an inglorious end.

Known to us primarily from Greek sources, Darius has inevitably been presented in the most pitiful light, yet there is strong evidence at least for his physical courage. As a young man he distinguished himself in single combat against a champion put forward by the Cadusii, an Iranian mountain tribe in rebellion against the Persian Empire. His route to the Persian throne was torturous, for he was only a minor scion of the royal family, posted far from the center of power as satrap (governor) of Armenia. But a rash of poisonings engineered by the palace courtier, Bagoas, cut a swathe through the ruling elite and opened his path to imperial rule in 336 BC.

When Alexander invaded the Anatolian empire in 334 BC, Darius could be excused for treating this as a local difficulty to be handled by the regional satraps. When he did respond to the invasion, advancing with his army into Syria in 333 BC, he seemed to have maneuvered Alexander into a disadvantageous position, emerging behind the Macedonians on the coastal plain at Issus. Darius drew up his army in a strong defensive position, then tried an outflanking move - tactics that might have succeeded against a lesser foe. The Persian forces were shattered, however, and Darius had no option but to flee the battlefield to avoid capture.

Darius' second great battle against Alexander at Gaugamela (Arbela) proved just as disastrous. Fleeing to Ecbatana, Darius intended to raise another army to continue the fight, but a rebellious subordinate Bessus, satrap of Bactria, held him prisoner and killed him. 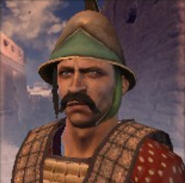