The Czech Republic is a country located in Central Europe, with its capital at Prague. The country was formed on 1 January 1993 after the "Velvet Divorce" with Slovakia, leading to the dissolution of Czechoslovakia and the creation of separate republics for the Czechs (and Moravians) and Slovaks. Today, the country consists of the historical regions of Bohemia, Moravia, and Czech Silesia, and it has a population of 10,553,443 people. In 1999, the Czech Republic joined NATO and then the European Union in 2004, and it is the 10th most peaceful government, having democratic governance. In 2016, the republic had the lowest unemployment rate in Europe. 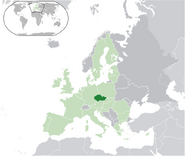 Location of the Czech Republic
Community content is available under CC-BY-SA unless otherwise noted.
Advertisement