Chile is a country located in South America, bordering Argentina to the east, Peru and Bolivia to the north, and the Pacific Ocean to the west. The nation is very thin, stretching from the Andes in the north to the Tierra del Fuego in the south. Chile was settled by Spain in the mid-16th century after Diego de Almagro and other conquistadores conquered the Inca and the other native tribes, but the Mapuche resisted the Spanish until the 19th century, when Chile won its independence alongside all of the other South American nations. On 12 February 1818, Bernardo O'Higgins declared the Republic of Chile, but his rivalry with the Carrera family led to his eventualy deposition. From 1861 to 1883, the Mapuche were crushed by the new Chilean government, which also conquered more lands in the north from Peru and Bolivia in the War of the Pacific. Chile struggled between left- and right-wing politics during the Chilean Civil War of the 1890s and the political turmoil of the 1960s, however, leading to the 1973 Chilean coup d'etat and the suicide of Marxist president Salvador Allende. Augusto Pinochet ruled Chile as a dictatorship until 1990, and a center-left coalition ruled Chile until 2010 and again from 2014.

In 2015, Chile had a population of 18,006,407 people, with 52.7% of the population being white, 39.3% mestizo, and 8% Native American (mainly Mapuche). Chile is a melting pot of several different ethnic groups and religions, and the Germans, the English, and the Italians make up significant parts of the population, coming behind the Spanish- and/or indigenous-descended majority. Chile is also religiously diverse; in 2015, 55% were Catholic, 25% atheist, 13% Protestant, and 7% other (including Judaism, other branches of Christianity, and other faiths). 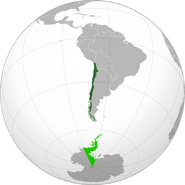 Population in 1884
Community content is available under CC-BY-SA unless otherwise noted.
Advertisement