Brazil is the largest country in South America and Latin America, bordering every South American country except for Ecuador and Chile. Brazil was colonized by Portugal under Pedro Alvarez Cabral in 1500, and it remained a colony of Portugal until 1808, when the capital was moved from Lisbon to Rio de Janeiro during the Napoleonic Wars. In 1821, King Joao VI of Portugal returned to Portugal in reaction to the liberal revolution of 1820, and independence was achieved in 1822 with the proclamation of the formation of a "Brazilian Empire", a constitutional monarchy. In 1824, the bicameral National Congress was formed, and Brazil's monarchy was overthrown in 1889 and replaced by a republic. The politics of the country were unstable during the 20th century, leading to the rise of dictator Getulio Vargas during the 1930s, 1940s, and 1950s, military rule from 1964 to 1985, and high crime rates into the 21st century. Brazil had the eighth-largest GDP and one of the world's fastest-growing economies in 2017, as well as being a breadbasket, an emerging global power, and the largest producer of coffee for 150 years. In 2017, Brazil had a population of 207,350,000 people, with 47.73% being white, 43.13% pardo (mixed race), 7.61% black, 1.09% Asian, and .43% Native American. 64.6% of the population is Catholic, 22.2% Protestant, 8% irreligious, 2% spiritual, and 3.2% others. 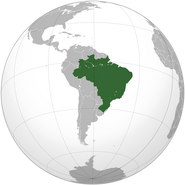 Location of Brazil
Community content is available under CC-BY-SA unless otherwise noted.
Advertisement