watch 04:21
Wiki Targeted (Games)
Do you like this video?
Play Sound

Boudicca (20-61 AD), also known as Boadicea, was the Queen of the Iceni Britons, a tribe of southern England. She led the Iceni Revolt in 60-61 AD, inflicting heavy losses on the Romans until the Romans won at the Battle of Watling Street and defeated her rebels.

Boudicca was the wife of Prasutagus, King of the Iceni, who was a Roman vassal. When he died of natural causes, she was treated poorly by the Romans, and in revenge for their mistreatment, led an uprising of the Trinovantes and Iceni, among other Briton tribes. Boudicca's forces defeated the Romans at Great Wratting, eliminating the Legio IX Hispania in an ambush that cost them half of their number. She proceeded to also destroy the Roman cities of Londinium, Camulodunum, and St. Albans. In 60 AD, the first British successes against Romans had been fought under Boudicca. The Celts were eventually brought to battle by 10,000 Romans under Suetonius, and with over 200,000 Britons, Boudicca fought them. In the Battle of Watling Street, the Celts failed to break the Roman lines and they were eventually slaughtered, with over 180,000 Britons falling in battle. Boudicca, defeated, refused to face shame from the Romans once more. She took poison, killing herself. She was immortalized as a heroine of British resistance to Roman rule and remains known as an Amazon of a woman. The Romans soon sent more troops to Britain and defeated the last resistance at the Battle of Mons Graupius in 84 AD. 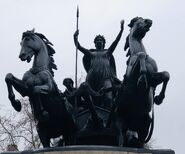 "Boadicea and Her Daughters", London, 2020
Add a photo to this gallery
Retrieved from "https://historica.fandom.com/wiki/Boudicca?oldid=269005"
Community content is available under CC-BY-SA unless otherwise noted.