The Bolivian Army is the land forces of Bolivia, consisting of 31,500 troops.

Bolivia was born in bloodshed in 1825 after a lengthy conflict against Spain from 1809 to 1825 in the South American Wars of Liberation, during which they were led by General Simon Bolivar (for whom the country is named). The Bolivians later formed the Peru-Bolivia Confederacy in 1836, but in the War of the Confederation, Chile, Peru, and the Argentine Confederation defeated them and dissolved the confederation. Bolivia, along with the rest of the countries of South America, was often involved in border wars or civil conflicts within, as the former colonies of Spain suffered from corruption, poverty, and social animosity between the white criollos and the mixed race mestizos.

The Bolivian army was defeated in the War of the Pacific of 1879-1883 by the army of Chile despite support from Peru, and it resulted in Bolivia becoming a landlocked country. They continued to fight more border wars such as the Acre War of 1899-1903 with Brazil and the Chaco War of 1932-1935 with Paraguay, while they also had to crush internal dissent. From 1905 to 1908 the "Bandidos Yanquis" Butch Cassidy and the "Sundance Kid", two American outlaws who traveled to Bolivia to go into hiding, committed several bank robberies with the assistance of their partner Etta Place. The gang was eventually brought down by the Bolivian Army, but only after several Bolivian policemen were killed by them. In 1967 they crushed Che Guevara's rebellion against them, stopping the communists (backed by Cuba) from taking power. 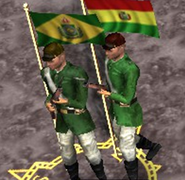 A Brazilian and Bolivian soldier in the 1800s

Bolivina soldiers on horseback in 1908

Bolivian police in 1908
Community content is available under CC-BY-SA unless otherwise noted.
Advertisement