The Republic of Austria is a country in Central Europe. Bordering Germany and the Czech Republic to the north, Hungary and Slovakia to the east, Slovenia and Italy to the south, and Switzerland and Liechtenstein to the west, Austria is a landlocked country, having lost its only outlets to the sea at the end of World War II with the transfer of Trieste to Italy and the independence of Slovenia from Austria-Hungary as a part of Yugoslavia. Austria's capital is Vienna, and it consists of nine states. In 2015, the population was 8,662,588 people, with almost all of them speaking Bavarian German. 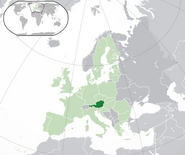 Population in 1992
Add a photo to this gallery
Retrieved from "https://historica.fandom.com/wiki/Austria?oldid=85493"
Community content is available under CC-BY-SA unless otherwise noted.