Athens is the capital and largest city of Greece, as well as a prominent city-state from 508 to 86 BC. Athens was originally a Mycenaean city, becoming an important center of the Mycenaean civilization by 1400 BC. However, it was destroyed by the Dorians during their invasion in 1200 BC, and it was later re-founded by the Ionians around 900 BC and dedicated to the goddess Athena.

In 510 BC, the radical aristocrat Cleisthenes - with military assistance from Sparta - overthrew the dictatorship of Hippias and established a democracy in Athens, replacing the four Ionic tribes with ten new ones; these tribes served as electorates. Each tribe selected 50 members for the Boule, a 500-man council that ran the day-to-day affairs of Athens. Most offices were filled by lot, but the ten generals (strategoi) were elected. In 499 BC, Athens sent troops to assist the Ionian states in their uprisings against the Persian Empire in Asia Minor, and the Athenians defeated the Persians at the Battle of Marathon in 490 BC. In 480 BC, the Athenian navy decisively defeated the Persians at the Battle of Salamis, and Athens would come to dominate the seas as the head of the Delian League.

From 445 BC to 429 BC, a great Athenian leader emerged in the form of the strategos Pericles, who improved the lives of Athenian citizens (by putting half of the population on the public payroll), executed a number of large public works projects, and built the Acropolis during an era known as the "Golden Age of Athens". In 431 BC, Sparta and other Greek city-states rose up against Athens in a bid to end Athenian hegemony, and the Athenian sea empire was defeated by Sparta and its land-based allies in the Peloponnesian War. In 411 BC, those upset with the outcome of the war rose up and installed a short-lived oligarchy led by Alcibiades and 400 other men, but democracy was restored not long after. In the Corinthian War of 395 BC-387 BC, Athens, Thebes, and Corinth allied against Sparta, only to later turn on Thebes as it became the new dominant power; at the Battle of Mantinea in 362 BC, Sparta, Athens, and an alliance of other Greek city-states defeated Thebes, Arcadia, and the Boeotian League and ended the Theban hegemony in Greece.

In 338 BC, King Philip II of Macedon invaded Greece and defeated the Athenians at the Battle of Chaeronea, limiting Athenian independence. In 322 BC, the Macedonian statesman Antipater established a plutocracy in Athens after the Lamian War, in which the Greek city-states' uprisings against Macedon were crushed. The wealthiest citizens ruled Athens, and Athens would continue to be a wealthy city with a brilliant cultural life, despite having limited independence. In 146 BC, the Roman Republic conquered Athens along with the rest of Greece, and Athens functioned as a wealthy city-state under the Roman province of Achaea. In 86 BC, during a civil war in Rome, the Roman general Sulla severely punished Athens for siding with Pontus, and Athens ceased to be an independent city-state.

Athens would remain an important city for thousands of years, becoming the capital of an independent and united Greece in 1830. It still has many classical influences, and it is revered as the birthplace of democracy and Hellenic culture. In 2011, the Athens metropolitan area had a population of 4,173,542 people. 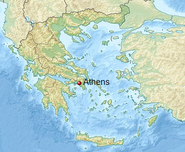 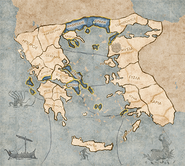 Map of the Athenian Empire in 432 BC

The skyline of Athens in 431 BC
Community content is available under CC-BY-SA unless otherwise noted.
Advertisement