Van der Linde Gang (formerly)
Arthur Morgan (1863-1899) was a famed American outlaw of the Wild West. He was known for being a key lieutenant of the Van der Linde Gang, and he amassed a federal bounty of $5,000 due to his participation in several bank and stagecoach robberies, gunfights, and other crimes; however, he was known to be an honorable man who always wished to help others. Morgan died of tuberculosis in 1899, not long after the gang dissolved due to Dutch van der Linde's declining mental state.

Arthur Morgan was born in 1863, the son of the outlaw Lyle Morgan and his wife Beatrice. He claimed to have never had a day of formal education in his life; his mother died when he was young, and his father was arrested for larceny in 1874 when Arthur was 11 years old. Four years later, Arthur was picked up by outlaws Dutch van der Linde and Hosea Matthews, who raised him to be one of the first members of the Van der Linde Gang. Dutch's teachings inspired Morgan to share his worldview in which the perfect world was one free of the law and the constraints of civilization. As a young man, Arthur was unlucky in love; his first love Mary Gillis' family disapproved of him due to his lack of money or a legitimate job, and his second love Eliza, who had given birth to their son Isaac, was killed along with her child in a home robbery. From then on, Morgan was unable to cope with the pain of romantic relationships, and generally steered away from them.

By 1899, Morgan had been with the gang for several years, and was friends with members such as Dutch, Hosea, Susan Grimshaw, Javier Escuella, Sadie Adler, Lenny Summers, Charles Smith, Tilly Jackson, Mary-Beth Gaskill, Karen Jones, and Simon Pearson, while he disliked Micah Bell, John Marston, Uncle, Orville Swanson, Leopold Strauss, and Bill Williamson. He lost a few other friends in the Blackwater massacre that year, and he and the rest of the gang were forced to go on the run as the Pinkertons were sent to hunt down the Van der Linde Gang as the Wild West neared its end. Morgan became concerned about Dutch's changing personality, as Dutch insisted that the gang continue to partake in heists, promising each time that it would be the last. Morgan realized that the gang's dream of settling on new lands in the West was becoming more and more impossible as Dutch led the gang further east and continued to carry out robberies, became entangled in the feud between the Gray family and the Braithwaite family in Louisiana, briefly fought against the American Mafia in New Orleans, carried out a disastrous heist in New Orleans which left Hosea and Lenny dead, interfered in a revolution in Guarma after being shipwrecked during an attempted journey to the Pacific, and Dutch refused to rescue John Marston, Abigail Marston, and Sadie Adler back in the United States. Morgan was also haunted by his worsening tuberculosis, which he acquired while collecting a debt from diseased farmer Thomas Downes for Strauss; as he faced his own mortality, he sought to ensure that he would leave the gang in a good position.

After a Pinkerton assault on the gang's camp, Dutch became paranoid about an informer in the gang, and many gang members chose to leave as Dutch went insane. Dutch decided on one last heist, an attack on a US Army payroll train, but, in the ensuing heist, Dutch left John for dead, abandoned Arthur to the army, and refused to rescue Abigail. Arthur and Sadie disobeyed Dutch by infiltrating the Sisika Penitentiary to rescue Abigail from Pinkerton agent Andrew Milton, who revealed that Micah Bell had been their informant since the gang returned from Guarma. Arthur then returned to the camp and openly accused Micah of betrayal, but Dutch, Bill, Javier, and Micah turned on Arthur and John, accusing them of disloyalty. Their confrontation was interrupted by another Pinkerton attack, and he fought off the Pinkertons to help John escape. Arthur then convinced Dutch to abandon Micah and leave, and Dutch rode off, leaving the gang for good. He died peacefully while watching the sunset, having lived his criminal life honorably. He was buried northeast of Bacchus Bridge in Colorado, and many of his friends left flowers at his grave. 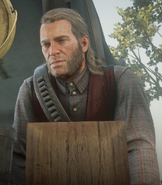 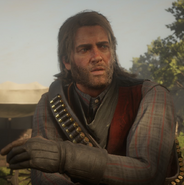 Morgan before the assault on Shady Belle