Angola is a southern African country, with Luanda serving as its capital. Angola was discovered by Portuguese explorer Diogo Cao in 1484, and the Portuguese founded a trading post at Soyo. In 1575, the fort of Sao Paolo de Loanda was founded by 400 soldiers and 100 settlers, and the Portuguese established several settlements along the coast so that they could engage in the slave trade. Attempts to expand into the vast unexplored interior during the 1670s and 1680s failed due to resistance from the Kingdom of Kongo, and it was not until the 1800s that European settlers began exploring the interior of the region.

From 1961 to 1974, guerrilla organizations such as the MPLA, UNITA, and FNLA fought against Portugal to create an independent Angola, but relations between the rebel groups declined after independence was achieved in 1975, leading to the Angolan Civil War. The Marxist MPLA fought against UNITA and FNLA throughout the 1970s, 1980s, and early 1990s, with Cuba and the Soviet Union backing the MPLA (Cuba even sent troops to help the MPLA) against the US and South African-backed UNITA and FNLA. A South African invasion of Angola was repelled, and UNITA was forced to agree to peace terms in 1992, agreeing to form a coalition government. Sporadic clashes continued throughout the 1990s, and it was not until UNITA leader Jonas Savimbi was killed in 2002 that the civil war came to an end. Angola became a unitary presidential republic ruled by the MPLA, which moved towards democratic socialism, and the economy came to be one of the fastest growing economies in the world due to Angola's vast mineral and petroleum reserves. However, the standard of living is poor, the infant mortality rate is high, and the wealth is unevenly distributed. In 2014, Angola had a population of 25,789,024 people. 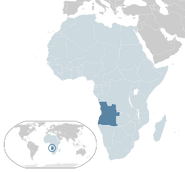 Location of Angola
Community content is available under CC-BY-SA unless otherwise noted.