Algeria is a country located in North Africa, along the Mediterranean coast. With a capital of Algiers, Algeria has the largest defense budget on the continent of Africa, importing most of their weapons from their old ally, Russia. The country gained independence from France in 1962 after the bloody "Algerian War", which saw the socialist FLN win a battle for independence from the French government using both guerrilla and terrorist tactics. Algeria was ruled by Houari Boumediene and the FLN until 1977, with Boumediene serving as the leader of a single-party state. Eventually, the issue of dictatorship came to the table, as the FLN's cancellation of the 1992 elections - which their Islamic Salvation Front opponents won - led to the Algerian Civil War. Since the 1990s, Algeria has fought against Islamist rebels, including the Salafist Group for Preaching and Combat (GSPC) and al-Qaeda in the Islamic Maghreb. In 2016, Algeria had a population of 40,400,000 people, with 98% being Muslim, 1% Christian, and .4% other, and most of the population consists of a mixture of Berbers, Arabs, Turks, Moors, and other groups. 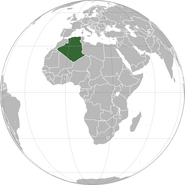 Population in 2002
Community content is available under CC-BY-SA unless otherwise noted.
Advertisement