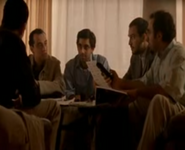 A hijacker instructing other terrorists on melee combat

Flag of al-Qaeda in Iraq

al-Qaeda in Iraq fighters during the Iraq War

Flag of the al-Nusra Front